Aaron Morris is a sophomore at The Pennsylvania State University and plans to triple major in History, Political Science, and Spanish. At the Center for Global Studies he hopes to broaden his knowledge of globalization and international relations to supplement his interests of global conflict, comparative politics, and the global economy.

On campus, Morris is involved in a Christian ministry known as Salt Company along with the following on-campus clubs: Young Americans for Liberty, Young Americans for Freedom, Students For Life, and Turning Point USA. In these student organizations, he enjoys engaging fellow students on the ideas of the free market, individual rights, and the U.S. Constitution.

In the future, Morris plans to attend law school in hopes of becoming a defense attorney for non-violent offenders such as those charged with drug violations. In addition to a career in law, he plans to enter politics at some point with the highest ambition of becoming president if his future family, financial situation, and political environment allow it. 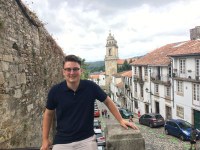