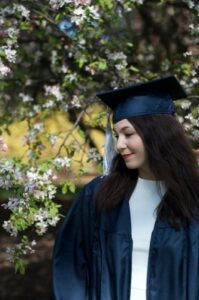 My name is Kayla DeStefano and I am from a small town called Minersville in Pennsylvania. I am a Schreyer Honors scholar and Paterno Fellow double majoring in Chinese and Asian Studies with a minor in Japanese. My majors have given me insight to many different cultures in East Asia, but I desired to have a more well-rounded knowledge on issues and cultures all around the world, not just in one section. My internship with the Center for Global Studies during the Spring 2016 semester has helped me grow as not only an intern, but I’ve gained professional experience as well as new globally cultural perspectives. 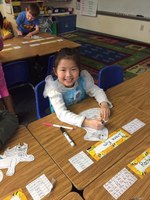 I’ve worked on a tremendous amount of projects throughout this semester, including writing monthly collaborative newsletters about events on campus, creating flyers and PowerPoints, attending and photographing CGS’s Brown Bag Series, which included global studies related lectures given by professors and graduate students on topics such as sustainability, gender justice, Confucianism, expats in hardship locations, and many more. They also had really good cookies. Additionally, I helped photograph and manage the Spring 2015 Undergraduate Thesis Symposium. During that time, I had the opportunity to listen to and learn about Penn State University and University of Pittsburgh students’ brilliant and innovative research topics with feedback from doctoral degree students. One of my favorite things that I’ve done this semester was organizing and attending our World Stories Alive series at Schlow library. My primary interest is language (as you could probably tell from my major/minor), and WSA gave me the opportunity to learn stories and songs from many new languages including Italian, Kazakh, Romanian, and more. I was able to work with my fellow interns and the presenters to create flyers and give them tips on how to interact with the attending children (I love kids). 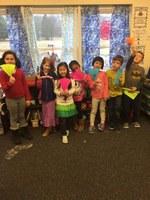 Lastly, my very favorite project that I have done this semester was run a Chinese mythology and folklore club at a local elementary school in State College called Young Scholars Charter School. After graduation, I am moving to Beijing, China to teach English to Chinese children for a few years before I pursue graduate school. This club gave me the opportunity to practice working with a large room full of kids, which was a huge challenge. The kids were really great, but I had to learn how to keep their attention and also how to discipline them if they were being uncontrollable. It took me a while to get used to, but in the end we had a mutual agreement that if they behaved we would do fun things together and we all had a great time. I ran the club every Thursday throughout the semester and I taught them about things like dragon folklore, Chinese fairy tales, the history and stories behind Chinese holidays such as Chinese New Year and Tomb Sweeping Festival, etc. We would also do crafts together including making Chinese paper fans and creating clay soldiers out of modeling clay after my lesson about terracotta warriors. While we did crafts together, I would also play popular Chinese music so they would be really immersed in the culture, which they loved. Finally, I filmed a video of the students singing one of their favorite songs to show at the school’s “extended day club extravaganza” event. This club was a really fun for me and I also gained experience creating lesson plans and filling out school paperwork.

Overall, I have really enjoyed my time being an intern with the Center for Global studies, especially due to the kindness and support from Sarah and Mary. I am excited to use the experience and knowledge I’ve gained in order to better communicate with future employers as well as understand global issues.