Research to Build and Present Knowledge

CC.8.6.11-12.F.: Conduct short as well as more sustained research projects to answer a question (including a self-generated question) or solve a problem; narrow or broaden the inquiry when appropriate; synthesize multiple sources on the subject, demonstrating understanding of the subject under investigation.

CC.8.6.11-12.G.: Gather relevant information from multiple authoritative print and digital sources, using advanced searches effectively; assess the strengths and limitations of each source in terms of the specific task, purpose, and audience; integrate information into the text selectively to maintain the flow of ideas

Production and Distribution of Writing

CC.8.6.11-12.D.: Develop and strengthen writing as needed by planning, revising, editing, rewriting, or trying a new approach, focusing on addressing what is most significant for a specific purpose and audience.

List students’ background knowledge and questions about the tsunami and nuclear plant meltdown in Fukushima as it comes out in discussion after viewing the Fukushima Picture File on the SmartBoard.

Each student will chose a role as one of the experts on or stakeholders in the Fukushima nuclear radiation disaster. Each will view primary source video, take notes on the factual information the person has to contribute and the values and interests that the person represents. Then the students will participate in a role-play symposium. Teacher may use a rubric appropriate to the class to evaluate participation.

Reaction essay after participating on role-play symposium. An art extension could be added to this assessment. Students could decorate an akabeko to represent the things they think are important in responding to and learning from the events in Fukushima.

Lesson 1 Introduction: Where did this akabeko come from?

Show real akabeko, or a picture. Explain its significance as a folk toy, charm against illness (originally smallpox), and legendary origin. All akabeko come from one spot in the world. That’s Aizu-Wakamatsu city in Fukushima prefecture, Japan. It has become a symbol of hope for Northeast Japan (Tohoku).

On the SmartBoard present images from the Fukushima Picture File (attached). They have been scanned from a brochure the prefectural government published in 1975.

The following are explanations to go with each picture in the Fukushima Picture File:

1. Mt. Bandai — Volcanic eruption in 1888 formed many lakes. This is Goshikinuma – the “lake of five colors.” The eruption dammed a river and formed vast Lake Inawashiro. You can still see the roofs of villages under it’s clear water.

3. There are several scenic highways (Can you guess when these pictures were taken?)

6. Fukushima has local sights. The gardens and old thatched roof houses are carefully preserved. The carvings of the goddess of mercy survive from the middle ages. Castles destroyed in feudal wars have been reconstructed.

9. Summer festivals are different in each town. People who’ve moved to bigger cities come back for the fun in the summer.

10. The local festivals come from old, old tradition and engage everybody — hometown folks and sightseers, too.

11-12. Tourists buy souvenirs. Many towns have a local folkcraft, fine craft, or food that can only be made and purchased in that local area. Japanese law protects and encourages local small industry that way. Here are some of the souvenirs you might bring back if you went shopping in Fukushima. The climate is like Pennsylvania, so apples and peaches grow well there – Asian pears and persimmons, too. Fukushima produces rice almost everywhere. Tariffs on foreign rice, zoning, and tax law have deliberately kept small farms producing food close to cities.

Have a two students record:

This lesson may continue over two class sessions. Review the listed questions. Assign each student two videos to view from the sources below:

Students each watch their videos several times and take notes on the second or third viewing. Then they should add more background observations and questions to the original list. Gather the class and have them share jigsaw style. Provide the class with a list of the people on all the videos, on which they can take some notes. They will each explain who they listened to on their videos and what that person’s statements added to their knowledge and questions. They should listen to each other present and note down at least three people who interest them. At the end of the discussion they should each choose a role to prepare for the symposium.

To prepare for their roles, the students should use a graphic organizer which has two sections. In the first, they will list what the person they have chosen knows from experience. In the second, they will list the things the person wants and values. Then each should write a statement from their person’s perspective. Students should be assigned to six-member groups, representing a variety of experience and viewpoint.

In panel discussion fashion, six students at a time will be seated at a table in front of the room. They will each have two minutes to present in turn and then can engage each other in open discussion. The students who are watching and listening can submit questions to a moderator who will address the panel. Then switch to another panel and repeat.

About forty years passed between the publishing of the new nuclear plant’s picture was printed in the Fukushima sightseeing brochure and the disastrous radiation of large parts of the prefesture. It may be another forty years before that area is safe to live in again. The situation in Fukushima is an open challenge to humanity.

The final product will be a personal response essay following the role-play. It should be 1½ to 2 pages in length. Students will use internet searches to fact-check the impressions that they have come away with after the role lay activity. They should use relevant citations to support their opinions. 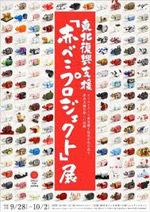 Share the following image of the Akabeko Project. It was an exhibition in Tokyo in September 2011. Artists from around the world decorated akabekos. The exhibit raised money for disaster relief in Tohoku following the earthquake and tsunami.

Each student will receive a white akabeko and decorate it to represent his or her own message to the world about the disaster in Fukushima. The art project should coordinate with the student’s essay. All the akabekos can be displayed together. The students will read and give short responses to each others’ essays.

Should the students choose to donate to relief for people affected by the Fukushima nuclear disaster, try Red Cross Japan or one of the groups listed on the Uncanny Terrain website.