Myanmar’s national identity is made of its rich history of warrior kings who built and expanded their Buddhist Kingdoms. These kingdoms form the third pillar of Myanmar. On Day 1, students learned that rice farming and Buddhism make up the other two pillars.

Homework (to be done before class)

The questions following the articles below can either be assigned as written homework or discussed in class the following day. This lesson can be done over two days or modified as needed.

Some depictions of the court and their members are below: 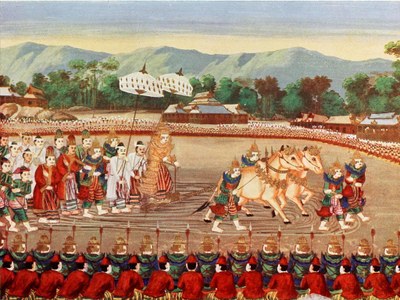 A depiction of the Royal Ploughing Ceremony by Saya Chone, a painter at the royal court.
Source: https://en.wikipedia.org/wiki/Konbaung_dynasty#/media/File:Saya_Chone%27s_%22Royal_Ploughing_Ceremony%22.png 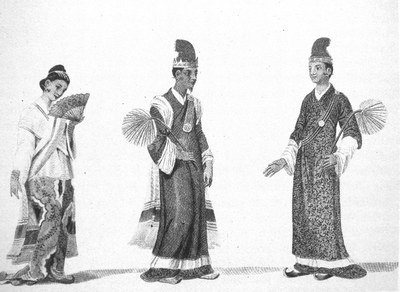 Burmese court officials in 1795
An Attawoon (middle), or Minister of the Interior, and his wife (left) and a Seredogee, or Secretary of State (right) in their dress of ceremony.
Drawn by Singey Bey, engraved by T. Medland. – An account of an embassy to the kingdom of Ava, : sent by the Governor-General of India, in the year 1795, Plate 310. Author Michael Symes
Source: https://en.wikipedia.org/wiki/Konbaung_dynasty#/media/File:Burmese_Court_Officials_1795.jpg

The Glass Palace of the Kings of Burma (first two paragraphs of the introduction, pg. 1-4 and pg. 62-72)
http://www.burmalibrary.org/docs20/Glass_Palace_Chronicle_Of_The_Kings_Of_Burma.pdf

What is the Glass Palace Chronicle and why is it important? (optional video)
https://www.youtube.com/watch?v=CWb41ii3924